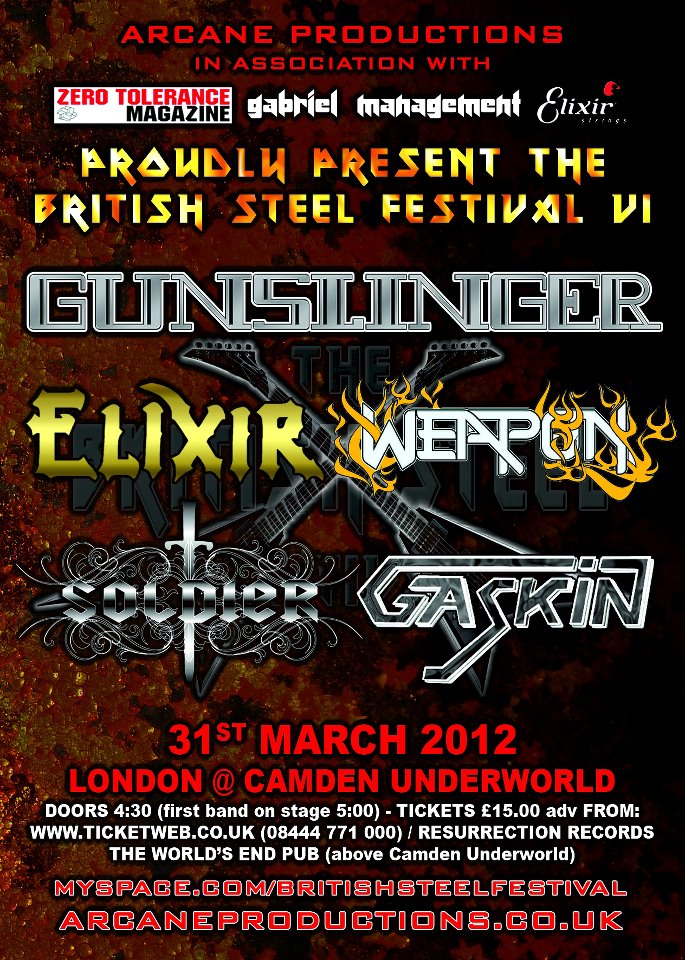 The British Steel Festival has become a regular part of our concert and festival schedule. The big advantage is that you can visit London again and you’re always secured of a good program with bands that you don’t see on every corner of the street. This sixth edition is not an exception to this golden rule and this time we’ll be able to see shows of SOLDIER, WEAPON, GASKIN, ELIXIR and GUNSLINGER. But first we travel from Leerdam to Breda and then by Eurostar from Brussels-South to King’s Cross / St. Pancras station in London. Early in the morning on Friday we arrive in Breda, where it’s bloody cold. But when we reach London a couple of hours later in the afternoon, we start sweating almost immediately because it’s over twenty degrees Celsius. What has been happening during that train trip? Our hotel is located in Euston, which is perfectly situated between the shopping center of London and Camden, where the festival takes place. When we are checking in at the hotel, the alarm bell goes off and we have to clear the building. The Dutchies have arrived!! After bringing our stuff to our room, we’re heading to Oxford Street right away to do some shopping. Surprisingly enough, the metal section has gotten a more prominent space in the big HMV shops. It used to be stacked somewhere near the outer corner of the shop, but now you can find it more in the middle of the shop, which is a very good sign. At about six o’clock, we have an appointment with Ian Toomey of BITCHES SIN and his wife for a nice get together, including diner. We are walking from Picadilly Circus to a cozy restaurant that will prepare the most delicious meals for us. A suggestion, when you want to go out and have a good meal in London. Go to Chinatown and find yourself a restaurant with a lot of Chinese customers instead of tourists. For sure you’ll have a great meal. ‘Chinese food is always good’ is my slogan and we definitely did have a very good meal tonight. On our way back to the hotel we also made a short stop for a nice cappuccino. Tomorrow we’ll be facing five (!!) NWOBHM bands and we want to have a good night’s rest before this will happen. Camden, here we come!

Saturday begins with a good breakfast, including some bacon and sausages for me. The walk to Camden only takes us about fifteen minutes and as always we first collect our backstage passes and photo pass for the festival at the door. Apparently, Phil Denton of ELIXIR is not feeling well at all and has passed on his duties to others, but everything has been arranged top-notch! Nothing can stop us now from having a wonderful night. Outside more people are gathering around and it’s even getting a bit crowded. Unfortunately, later that evening I heard that there have been less visitors at the festival than in previous years. I can only think of one reason. ELECTRIC WIZARD played London that same night and they attract a lot of fans from this genre. 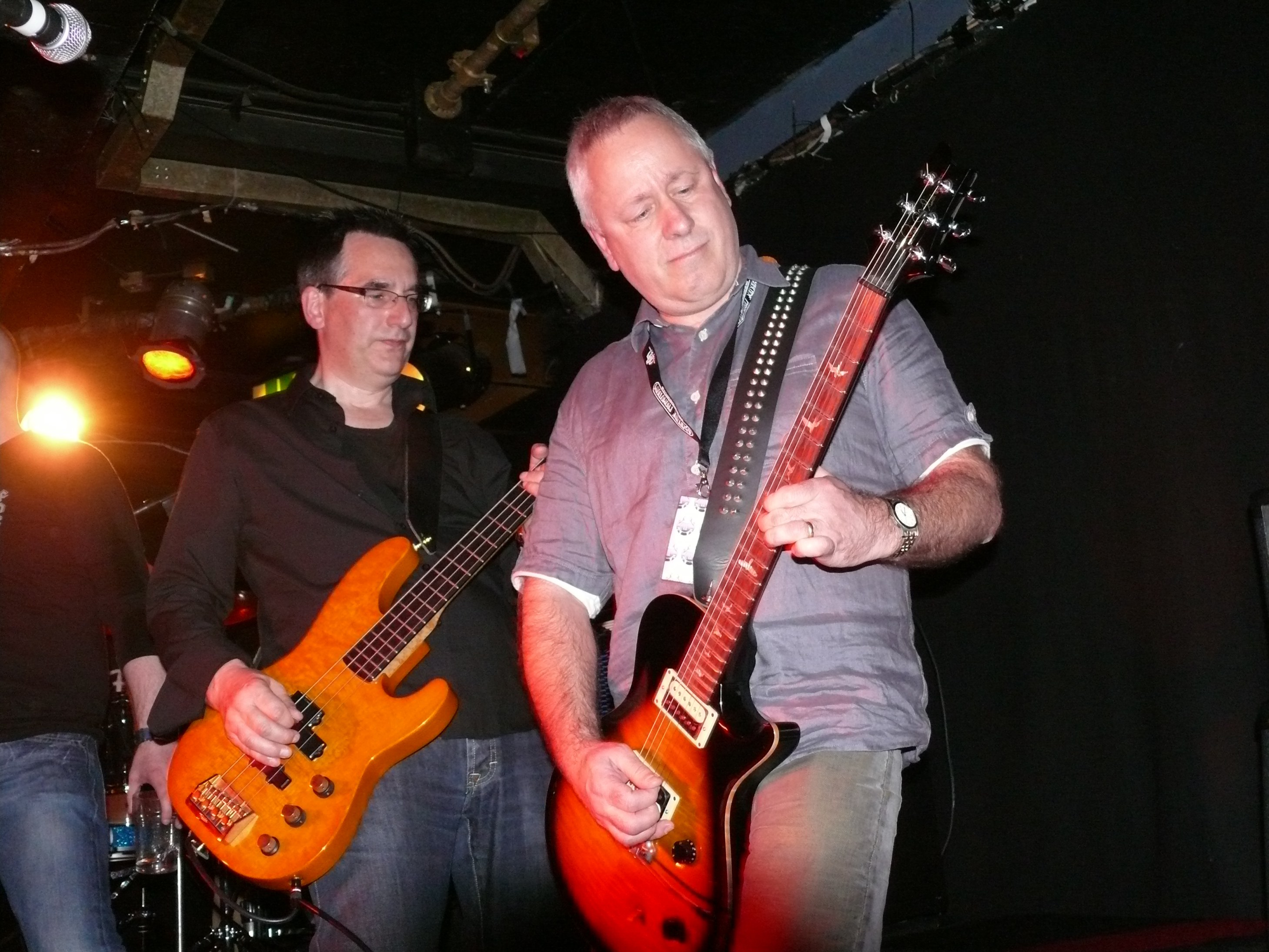 Anyway, for those who stayed at home: you have definitely made the wrong decision. You can’t miss out on a band like SOLDIER!! They are kicking off tonight and they do this quite firmly with “Infantricyde”, ”Storm Of Steel” and “Lock ‘N’ Load”, where you can count “Storm Of Steel” as one of my personal favorites of the set. Of course they also played songs like “Silver Screen Teaser” and “The Demon In The Room” is a brand new song. There are a couple of others on the list, but due to time restrictions, they have to shorten their set a little. SOLDIER simply can’t leave the stage without playing “Sheralee”, which becomes their absolute highlight. The band hasn’t played on stage for nearly twenty years, but tonight they prove that they haven’t forgotten how to rock their audience. 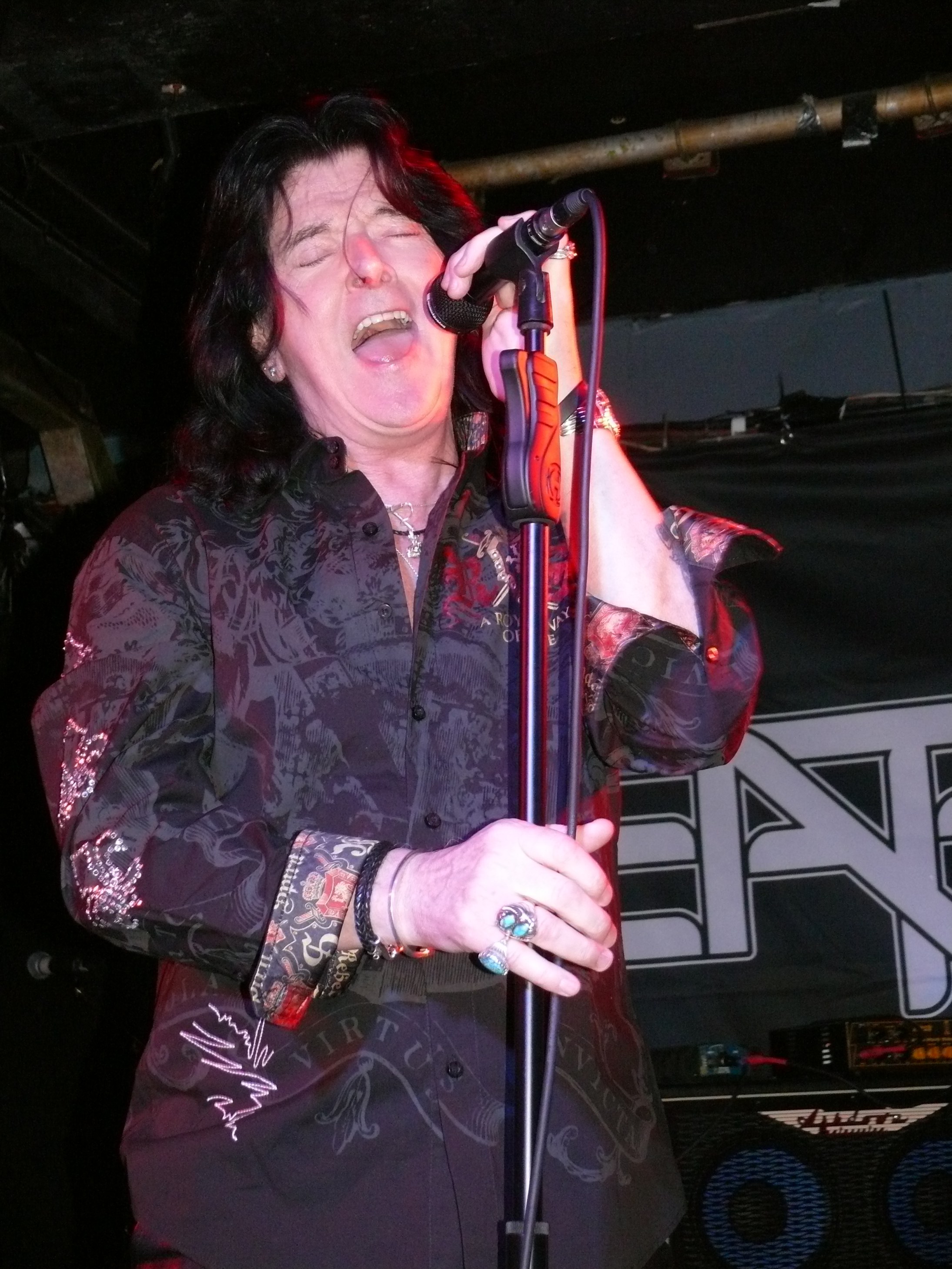 WEAPON is on next. I’ve written before, that I’ve seen the band in their heydays as support of MOTÖRHEAD during a tour of Lemmy and his mates, where they recorded “No Sleep ‘Till Hammersmith” at the old Hammersmith Odeon. After that, the band appeared at the annual Headbangers Open Air Festival in 2005, but we had to miss that because of holidays. I’m really glad to see them here tonight and I have high expectations. The band starts off with the intro song called “Ride The Mariah”, which is followed by “Liar”. Their music has got a very catchy vibe and it gets really interesting, when the guitars start to cry. “Killer Instinct”, “Ready 4 U” and “Fountain Of Paradise” follow at high-speed and soon, the venue turns into one big happy family when they start “It’s A Mad, Mad World”, what was the flipside of their hit single in the early days. After “Blood Soaked Rock” and “Warrior”, it’s time for that magical moment we’ve all been waiting for. It’s the secret weapon (lol) of the band WEAPON: a song called “Set The Stage Alight”, which is chorused by the whole audience. It becomes a worthy closer of the set of tonight. The soldiers have left the arena and have laid down their weapons (lol).

It’s time for GASKIN now to enter the stage. It has been twelve years ago since we last saw them at the Wacken Open Air Festival in the year 2000. There were many NWOBHM bands at that particular year. Those were the days. Guitarist in that line-up was Andy Solomon and it’s a nice surprise to see that this natural talent is also playing the guitar here tonight. They open their set firmly with “Sweet Dream Maker”, in which the guitar players have a leading role. “Tomorrow Today” and “Still Got The Hunger” follow next and after that we are treated to a very strong and new penned song called “The Contract”, that is going to be the new single of the band as well. Afterwards they let go all breaks in “No Way Out”, “Come Back To Me” and a very loud version of “End Of The World” and set closer “I’m No Fool”. People will think of this show for a long time to come. A solid, high quality rock band like GASKIN doesn’t need many words to be qualified. GASKIN simply wins over the crowd in no time and they are a great warming up for ELIXIR, who will be next on the bill. However, there wasn’t a lot of response, when Paul Gaskin asks if anybody still knows Neil Kay. No one?!? I think, that many people were too young to know this legendary deejay from the Heavy Metal Soundhouse. However, the best part of the evening was, when Paul showed me a copy of the (meanwhile sold out) double LP “Beyond World’s End 80-81”, which he signed with a big smile on his face. This very moment was definitely the cherry on the cake for me tonight. Thanks, man! 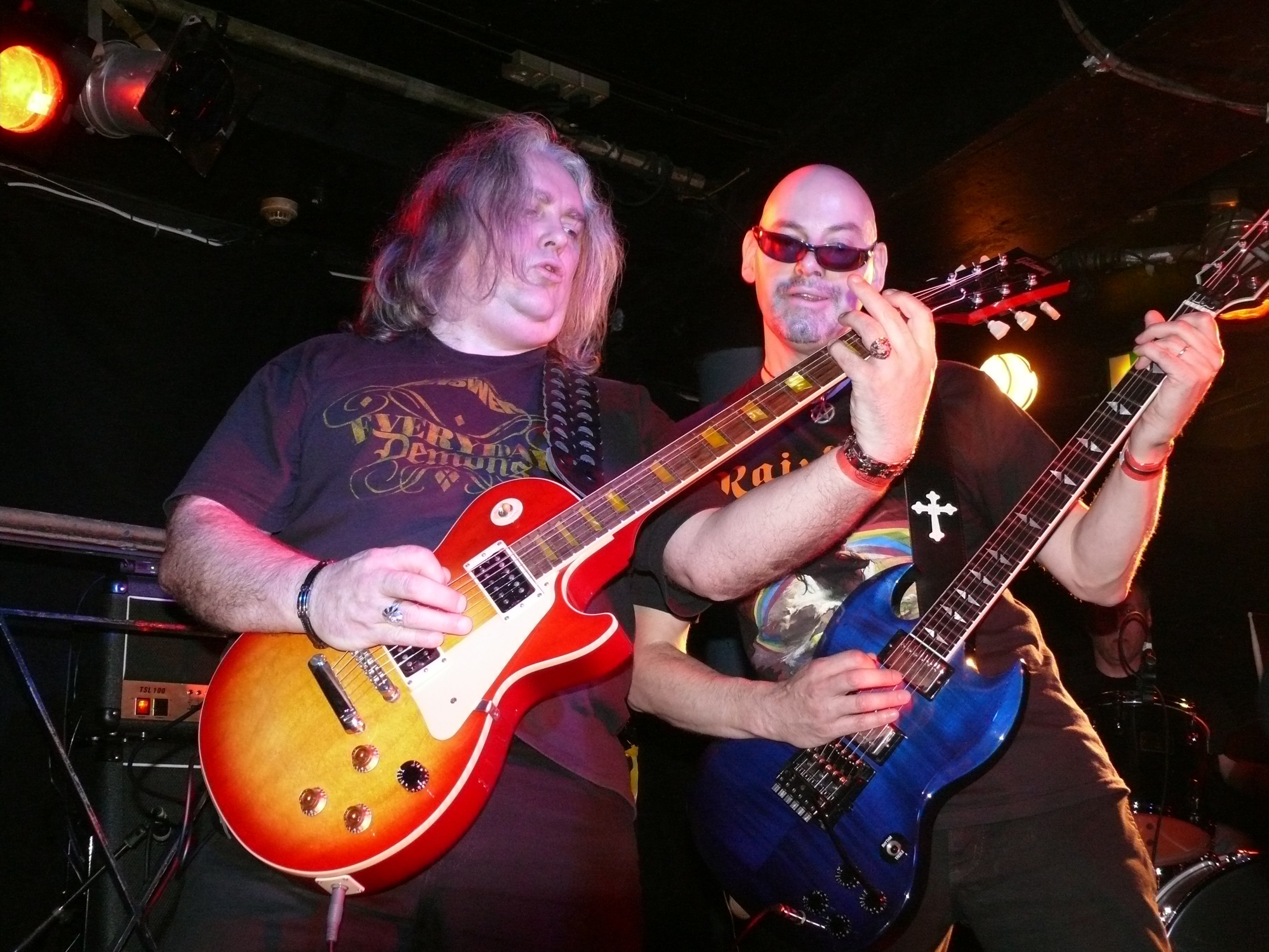 ELIXIR is responsible for high quality heavy metal since many years now and their set list actually doesn’t really matter, because people will go crazy whatever they play. Tonight will be the same, despite the fact that Phil is as sick as a dog and many of the organizational duties for the whole event have been divided over some of the other band members. During the one hour show, Phil looks pretty healthy and in a good condition, but this is just his appearance, so he tells us after a short conversation after the show. The gig will not be disturbed by a sick guitar player and the band starts in a very enthusiastic way with “All Hallow’s Eve”. The set continues with a good version of “The Pagan Queen”, a song that you don’t hear that often, and “You’re Not Fooling Me”, that is also not played too much during their shows. Most eye-catching person tonight though is bass player Kevin Dobbs, who is honored to be our personal hero of this evening. Mainly because he is constantly in the front row, encouraging the crowd to sing along and applaud during the gig, he’s playing himself in the picture and becomes our true hero. “The Idol” and “Born Loser” follow very quickly afterwards. Then the moment appears, that the band wants to pay tribute to another great (and sadly missed) hero and they honor Ronnie James Dio during “Deal With The Devil”. The tribute part consists of a short part of “Man On The Silver Mountain”, which they incorporate in this song. Frontman Paul Taylor is singing better than ever before and “Knocking On The Gates Of Hell” is harmonized by the hungry audience with of course Kevin being the conductor in the front row. Set closer of the night is “Treachery”, but by then the hall has reached its boiling point already. The only song we missed tonight is “Son Of Odin”, but besides this minor detail, we got another excellent show tonight, that will stay in our memory for a long time. And we dare to say this about a band, that we get to see on stage at least once a year. ELIXIR never gets dull and highly concentrated guitar players Phil Denton and ‘Storming’ Norms are constantly giving the audience the best they’ve got. A high-class performance, despite the illness of Phil. Only then you belong to the premier ranks in this scene and that’s my final comment about this awesome show. Period. 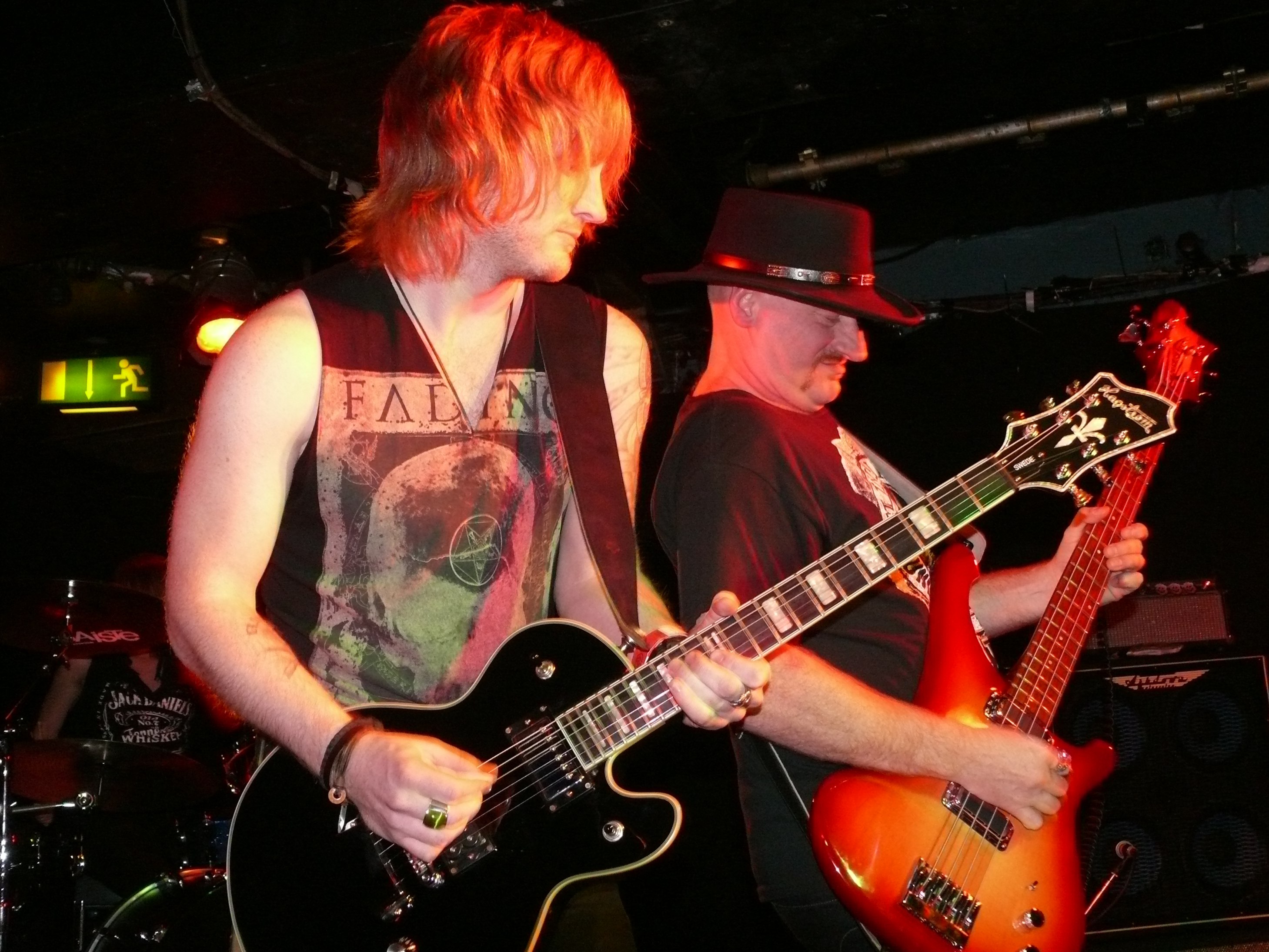 The headliner of tonight is a very odd choice, because GUNSLINGER doesn’t really earn this status in my eyes, but I know I am not in charge tonight. Bass player Alan Davey has been a member of HAWKWIND for many years, replacing Lemmy on the bass guitar. And he tries his best to create a perfect copy. GUNSLINGER started their career as CHAINSAW and after that they changed their name into STALLION and later on into STORMBRINGER. When Alan Davey leaves the band to join HAWKWIND, the band changes its name again into MERCHANTS OF SORROW. Many of the songs tonight are from their debut album “Earthquake In E-Minor”. The guitar player plays some nice guitar solos, but the biggest eye-catcher for me is female drummer Cat Bothwell, who hits the skins like a real wild woman is supposed to do. She could be the perfect follow up for Denise Dufort (GIRLSCHOOL), if she would ever decide to quit the band. After two songs about the female orgasm (“Night Song 1” and “Night Song 2”), I have heard it all. I believe, that they have the best of intentions. There really is no doubt about it. Set closer “Gunslinger” is in fact an exact copy of “Overkill” (MOTÖRHEAD), which is repeatedly restarted by Cat. She can’t get enough of it playing the song over and over again.

In the meantime I am already saying goodbye to my colleague writer John Tucker and to Paul Gaskin. I know, what is going to happen next. The cleaners will start their work right after the very last notes have faded away, because the dancers will take over the place in about ten minutes from now. Next year we hope to be in the front rows again at the seventh edition of the British Steel Festival. The trip back to Leerdam the next day is going very smoothly. Spending a weekend in London is over before you know it. But men, did we have a great time again!

Setlist GASKIN:
Sweet Dream Maker
Tomorrow Today
Still Got The Hunger
The Contract
No Way Out
Come Back To Me
End Of The World
I'm No Fool

Setlist ELIXIR:
All Hallows Eve
The Pagan Queen
You’re Not Fooling Me
The Idol
Born Loser
Deal With The Devil
Knocking On The Gates Of Hell
Treachery (Ride Like The Wind)

Back to Main Page